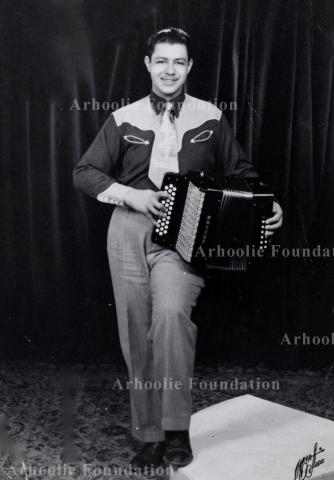 “Fred Zimmerle … has long been one of my favorite accordionists, and his duet singing with old-time troubadour Berlanga brings chills down my spine,” wrote Frontera Collection founder Chris Strachwitz in notes to a compilation. He cites one track in particular as an outstanding example of Zimmerle and Berlanga performing together with the early Trio San Antonio: “Un Recuerdo Quedó” (One Memory Remained), recorded in 1945 as a 78 on the Ideal label. “This selection has some of the purest country-style singing in Mexican-American music,” adds Strachwitz. (Aside from doing vocals on this track, Zimmerle plays accordion and Berlanga is on bajo sexto.) The Frontera Collection contains dozens of recordings by both Trio San Antonio and Fred Zimmerle as a solo artist. Many of these recordings have been released over the years by Arhoolie Records as compilations, including the eponymous LP (Arhoolie 3004) featuring the catchy polka “Viva el West Side” that highlights the group’s musicianship. (The album was later reissued on CD (Arhoolie 9052) with additional tracks.) Thanks to Strachwitz’s liner notes, these albums also serve as the primary source on Zimmerle’s life and career. Despite his stature in the genre, whatever written material about the artist that may exist is not readily found online.