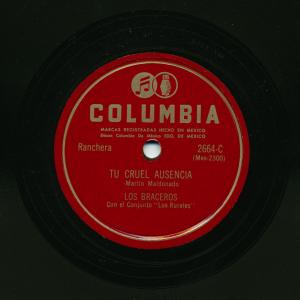 Response to CONFLICTING COMPOSER CREDITS ON

Thanks for this excellent question. I'm afraid the answer will not be completely satisfying because it involves the quirks and customs of the record industry.

The record labels must identify the composers of songs they plan to release on commercial discs. They must try to find the publisher of the songs so they can pay royalties for the sales. As you can imagine, this is a hit and miss effort, when an effort is made at all. Most large, legitimate labels do their best to identify composers, to avoid the liability of lawsuits from songwriters and their heirs. When they honestly cannot identify the holder of the copyrights, they use the D.A.R. notation that you ask about. In Spanish, this stands for Derechos de Autor Reservados, or sometimes just D.R., Derechos Reservados. They are used when a label cannot immediately identify the composer, but is holding royalties in reserve until the songwriter and/or publisher are found. There are similar annotations in English copyright practice. You may also see the abbreviation P.D., for Public Domain, indicating a copyright has expired.

When known, the composer is identified beneath the song title. Yet, there are all sorts of variations because each record company writes the credits that appear on their releases. So the names might conflict, or one label might get it wrong, or a musician may take credit for somebody else's song, hoping it won't be disputed. And there are always loopholes. For example, some Latin record labels in the U.S. would record a song from a Cuban composer but list it as D.R. because the copyright was held by Cuban publishers who could not enforce their claims due to the political boycott of the island. Many of these salsa song became hits in the U.S. and the songwriters in Havana never sa a dime.

I hope this helps explain a little of the complications involved. It's frustrating, I know, but there are plenty of official sources, such as songwriters' associations, that keep track of the proper credits.

Thanks for the interesting question.

This 78 recording ("Tu Cruel Ausencia" by Los Braceros) shows Martín Maldonado as composer. It's basically the same song recorded by Los Alegres de Terán and included on Arhoolie 9048 under the same title with the credit shown as DAR. I have noticed that many songs when performed by different artists show different composers although the music and lyrics are essentially the same. I am wondering whether in this case the composer actually is Martín Maldonado and what processes, if any, are used to address competing authorship.

Other Recordings by Los Braceros

More
A joint project of
the UCLA Chicano Studies Research Center,
the Arhoolie Foundation,
and the UCLA Digital Library
C/SAFUCLA Library
Made possible by the UCLA Los Tigres del Norte Fund, the National Endowment for the Humanities, the National Endowment for the Arts, the GRAMMY Foundation, the Fund for Folk Culture, Arhoolie Records, Mr. and Mrs. E. W. Littlefield Jr., the Edmund & Jeannik Littlefield Foundation, and others.