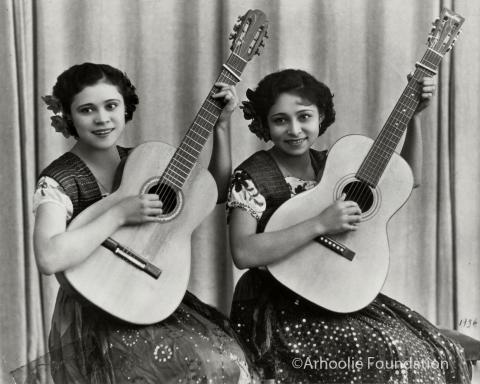 Despite their fame and influence, biographical information on the singing sisters is scant and scattered. Wikipedia has a short entry on them in a language that appears to be Breton, though oddly enough, there is no entry in English or Spanish. There is a smattering of biographical data on miscellaneous music websites, and a good summary of their career in Barrio Rhythm: Mexican American Music in Los Angeles, written by UCLA ethnomusicology professor Steven Loza. Among his sources, Loza cites liner notes written by Philip Sonnichsen for the Folklyric LP Los Primeros Duetos Femeninas (sic): The First Women Duets (1930-1945), released in 1984 by Arhoolie Records.

In 1937, the Padilla sisters made their maiden recording, the hit “La Barca de Oro”backed with “Por Qué Será.” The record became “an instant success,” according to the album notes for the Women Duets disc.

We came to the USA in 1959 as children. We grew up listening to this wonderful duo. Your article clarified many misconceptions I had about this duo, i.e., roots in Los Angeles, not Mexico. I also expanded my knowledge about Margarita and Maria. They truly had angelic voices and I treasure their music. Thank you for the article.

NS: Thanks for the clarification, though the language is still a puzzler. I've added another link to a Spanish website, for interested readers.

Just for info, the Wikipedia article you link to is in Breton.
No, I don't know why, either...