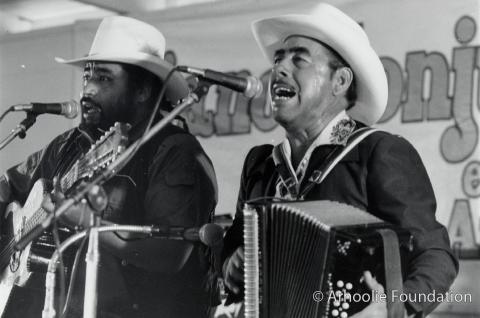 Valerio Longoria is considered one of the most innovative conjunto musicians who shaped the music’s classic period in the post-World War II era, a group considered “la nueva generación,” the new generation. The son of migrant farmworkers, he is credited with a number of firsts in the Tejano genre during a career that spanned more than 60 years. He was the first to introduce lyrics to what once was a strictly instrumental style. He was the first accordionist to also sing while he played, the first to introduce trap drums to the traditional instrumentation, and the first to experiment with octave tuning. He was also the first to incorporate other styles into his repertoire, especially the musically sophisticated bolero that gave the genre an air of being more jaitón, slang for “high-tone.”

Through such innovations and modifications, the musician from lowly migrant roots elevated the blue-collar ensemble from its status as cantina music to a style seen as more respectable. The 2001 PBS series American Roots Music proclaimed Longoria “a pivotal figure in the evolution of the conjunto style by introducing innovations that catapulted the music to a new stylistic level while raising its social value.”

While sources differ on biographical details, the Texas State Historical Association states that Longoria was born in Clarksdale, Mississippi, on December 27, 1924. (Others say it was March or February of that same year and in Kenedy, Texas). In any case, there is no dispute that his beginnings were humble. Longoria worked the fields at a young age and had little formal schooling. Yet, he developed a talent for music – and a curiosity about instruments – at an early age.

Longoria got his first guitar when he was six and he also learned to play harmonica. His father, Valerio Longoria, Sr., later bought him an accordion for $10, which he learned to play by watching conjunto master Narciso Martínez. He started tinkering with instruments as a young boy, taking them apart and rebuilding them to see how they worked. It was a knack that would later serve him in his quest for creating new sounds with traditional instruments. In one accordion, for example, he added an extra row of buttons to the standard three rows; in another, he tuned the reeds an octave apart “to produce a rich, organ-like sound,” according to the National Endowment for the Arts, which named him a National Heritage Fellow in 1986. Longoria’s self-taught skill with his instruments made him “something like the Les Paul of the accordion,” writes Eugene Chadbourne on the All Music website.

Longoria hit the migrant trails in the early 1930s, working the fields by day and performing by night at dances for fellow workers. It was around this time he developed another innovation – a system of straps allowing him to play standing up. “One of his biggest influences on the music,” writes Chadbourne, “was just a question of posture: it was largely Longoria that got accordion players used to the idea of standing up onstage.”

In 1942, at age 18, Longoria joined the Army and was stationed in Germany, the mother country for accordion and polka music, which had been introduced to Northern Mexico by German immigrants. While there, he played accordion in local nightclubs. After the war, he settled in San Antonio, an emerging mecca for conjunto music. There, he formed his own band and made his first recordings for the Corona label: the instrumental polka “El Polkerito” and “La Guera Chavela ,” a corrido also known as “Jesús Cadena.” He also recorded for Ideal Records, making $20 per recording, $5 more than with Corona. Though he went on to wax more than 200 tracks for almost every major label in the genre, the Ideal sides are still considered his best work. The Frontera Collection currently features 374 recordings by Longoria, including 62 with his conjunto and 312 as a soloist or with collaborators, such as the 18 with his father. Many of his recordings are available on various compilation CDs released by Arhoolie Records, the label owned by Frontera Collection founder Chris Strachwitz. Arhoolie also released two CDs by the accordionist’s conjunto; one of them, entitled “Caballo Viejo” (Old Horse), features three generations of Longoria musicians: Valerio Longoria on accordion, his son Valerio (the 3rd) on bajo sexto (12-string guitar), another son, Flavio, on alto sax and Valerio (the 4th) on drums.

In 1959, Longoria went on the musical migrant trail, moving to Illinois, then Florida, Colorado, Idaho, and eventually California. He continued to record along the way, for Firma in Chicago and Volcán in Los Angeles. But those labels failed to promote his music effectively back in Texas, where his fan base began to slip away. In the 1980s, he moved back to the Lone Star State after getting wind of rumors that he had died and his friends were planning a memorial album. He again settled in San Antonio and began to rebuild his career and his reputation.

In 1981, Longoria established a new base at the Guadalupe Cultural Center in San Antonio, where he taught accordion to children and aspiring musicians for almost 20 years. In 1988, he scored another hit with “Amor Chiquito,” teaming with Tex-Mex singer Freddy Fender. In 1997, at the age of 72, he appeared in the hit film Selena, about the life and tragic early death of young Tejana singing star Selena Quintanilla, played by Jennifer Lopez.

Among his many honors, Longoria was among the first inductees into the Conjunto Music Hall of Fame in 1982. And in March 2000, he received a Lifetime Achievement Award at the San Antonio Current Music Awards. Three months later, the revered musician was diagnosed with lung cancer and spent his final days in a San Antonio nursing home. His death in December of that year, at age 75, was reported in a news obituary in The New York Times.

“He had a real spark to him,” Strachwitz told the newspaper at the time. “I believe he had one of the best voices of any of the singers from San Antonio.”